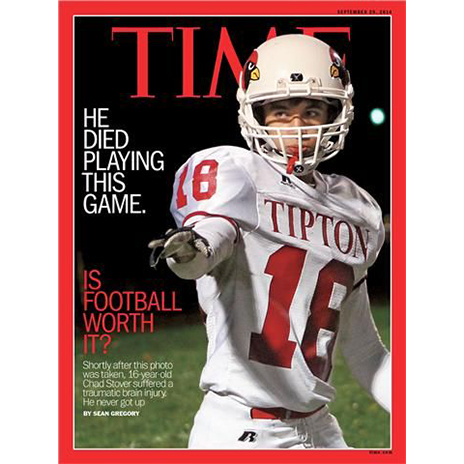 The latest cover of TIME features a young football player with the words “He died playing this game. Is football worth it?”

The boy on the cover is Chad Stover; he passed away after suffering from a traumatic brain injury. He was an active sixteen year-old from Tipton, Missouri who played football for the Tipton Cardinals as a defensive back.

The Cardinals were trailing 27-18 during a game on Halloween in 2013. Chad dove to tackle with his arms outstretched when he brushed the opposing player and his helmet hit the ground. “Twice, a Tipton assistant coach asked if he felt well enough to return to the game. Twice, Chad said he was good.” recalls Sean Gregory, writer of the story.

Chad went back into the huddle and said “Something’s wrong” to his teammate before collapsing. He fought for two weeks in a hospital but his condition never improved.

“…he lives on in our memories, he lives on in everything we do and maybe he can make a difference” Chad’s mother says through her tears.

The NFL is as popular as it’s ever been but, according to ESPN, youth participation in tackle football is declining in America. If precautions are not taken to make football a safer sport, who is going to be left playing the game?

“This isn’t just a sad story, it should spark a conversation, an important one.” says Gregory.