The Rise of the Foldable Bike Helmet 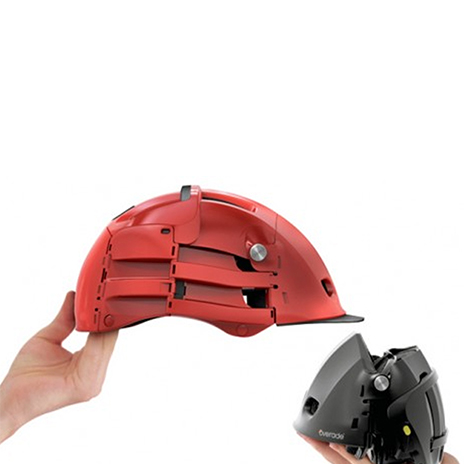 Between 2007 and 2012, 68 per cent of riders fatally injured in a bike accidents without car involvement were not wearing a helmet in BC. Helmets are not only an essential piece of equipment for bike commuters but are also mandatory by law in Vancouver. After the ride is over they can become a hassle to carry around.

Folding a helmet, like folding a bike or collapsing an umbrella, makes it easier to carry. With different types of foldable helmets on the market in Europe, expect to see similar models come to Canada and help lighten your load:

The PLIXI helmet by Overade was developed by Paris-based engineer Philippe Arrouart. According to The Daily Mail, Arrouart began to study why urban cyclists and commuters felt the need to ditch helmets while cycling in cities. He felt that users of the bike sharing system in Paris were not sufficiently protecting themselves. He created the company Overade in 2010 and worked with designers to insure the helmet looked “chic and trendy”.  The result was PLIXI, a stylish helmet that folds into a third of its size. This helmet has not yet made US CPSC standards and is currently not available to Canadian customers.

Similar to Overade, English inventor Jeff Woolf came up with the idea for Morpher after observing users of European bike shares riding helmetless. Woolf’s life was saved by his helmet when he was involved in a hit and run which inspired him to protect the skulls of other cyclists. The Morpher folds in half and its collapsible design has been patented worldwide. Woolf expects the Morpher to be available in North America in early 2015.

Carrera’s foldable helmet was first introduced in 2012. The helmet is made with protective EPS strips joined by nylon bands, which adapts to the shape of your head. The flexible frame collapses like an accordion and reduces the helmet’s size by 20%. The foldable helmet also provides an exceptional amount of ventilation. This model has met US CPSC standard and recently launched a stylish collaboration with Brooks.

Spain-based start-up Closca has a uniquely designed cloth covered “Turtle” helmet that meets US CPSC standards. The helmet was designed by two engineering students who claim their product not only allows for a collapsible form, but also softens physical impact and absorbs more shock.