Winter in the backcountry – scenic, pristine, natural, epic, adventurous. But it can also be a dangerous place, especially when there’s a risk of an avalanche. With so much terrain to explore here in our own backyard, it is tempting to venture off the grid, but if you do, make sure you’re prepared.

Earlier in the year, you may have seen a dramatic video of a snowboarder caught up in a sudden avalanche in the backcountry not far from Whistler. Thankfully, he survived. And he’s lucky for that. Statistics show that only 30% of people caught in an avalanche live to tell about it. He credits much of that to a special backpack.

The JetForce avalanche airbag from Black Diamond Equipment acts a bit like a parachute combined with your car’s airbag. With a tug of a strap, it immediately inflates, helping you to stay near the top of the avalanche surface and offering some protection from flying chunks of ice and snow. And if you are buried by an avalanche, the bag acts as pocket of breathable air to increase your chances of survival.

Of course, there’s more to backcountry safety than a bag of air. With no groomed trails, chair lifts, or even cellphone reception, being prepared, alert, and ready for nearly any situation are the rules of the backcountry.

If you are thinking about heading into the backcountry, the first thing you should do is take an avalanche safety course. Being able to identify risky situations and pre-slide conditions can help you avoid them. And of course, never venture out alone, plot out your general route ahead of time, and always let someone outside of your group know your plans and when you expect to be back.

Other things to consider when taking part in winter activities in the backcountry:

And of course, the backcountry isn’t for everyone. Know your limitations (physical and mental) and stick within them. If you’re the kind of person who defines “outdoorsy” as drinks on a patio, every mountain resort in BC has great groomed trails and lodges for you.

From Whistler to Silverstar and all resorts and slopes in between, BC is a skier’s and snowboarder’s paradise. Unfortunately, all that shreddin’ and swooshin’ can lead to some severe injuries. Every year, over 5000 Canadians are seriously hurt in skiing and snowboarding accidents across the country. So whether you’re riding hard through 7th Heaven or gliding gently down the Cut, make safety your first priority on the mountain. Here’s how.

Before strapping your boots into the bindings, take a moment to familiarize yourself with the safety guidelines for your resort. Nearly every ski mountain in BC is a member of the Canada West Ski Areas Association (CWSAA) and they all operate under the Alpine Responsibility Code. Those are the ten rules you see posted on yellow signs all over ski areas, like the one below. 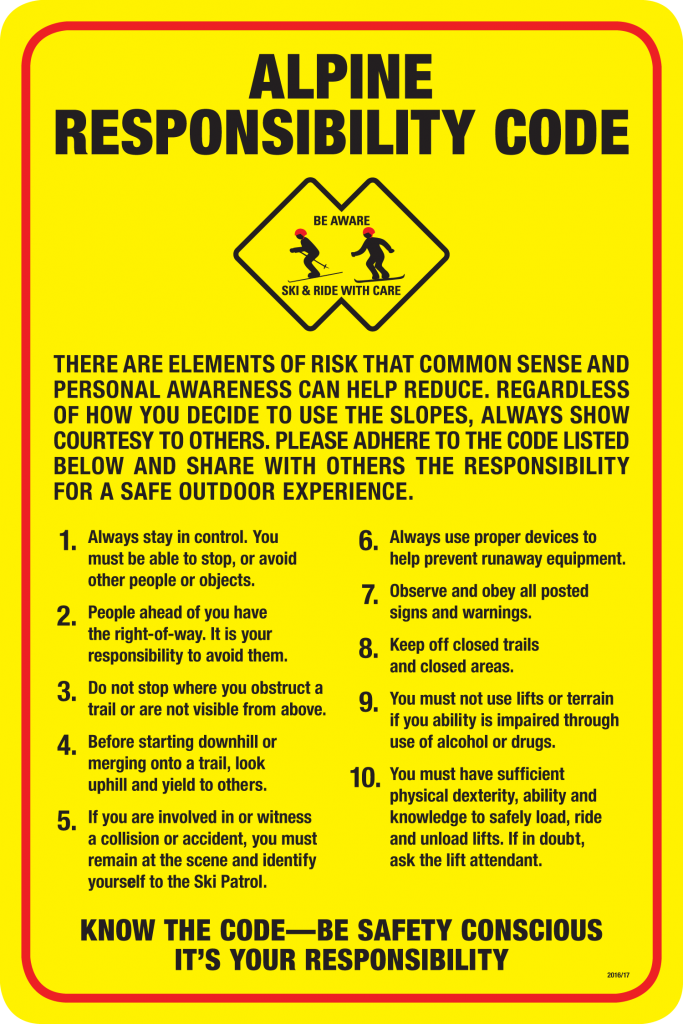 The Code is about staying in control, respecting others on the slopes, and respecting the resort’s staff, rules, trails, and equipment. Knowing your abilities and limitations is also vital to your safety and the safety of others.

In addition to following the Code, there are a few other things you can do to stay safe and have a great day on the slopes. Begin by making sure you have the right equipment with everything fitting properly and suited to your ability. Also see that your skis, boards, and bindings are tuned up and checked each season. A loose binding or a dull edge can hamper your ability to stop safely and quickly.

Always check the forecast before heading to the mountain and dress accordingly. And remember that conditions can change quickly. You may need to bundle up with water- or wind-resistant gear and multiple layers on one run, and then slather on the sunscreen on the next. Come prepared for different conditions and if you’re not comfortable or find yourself getting tired (heavy snow and icy runs can be exhausting), then take a break or simply call it a day.

And of course, wear a helmet. While not a guarantee of protection, studies show a significant decrease in the incidence and severity of head injuries while wearing a helmet.

Recently, our own Aimee King did something extraordinary. She jetted off to Chicago and completed her first marathon. Pounding the pavement for 42 kilometers (or 26 miles) isn’t everyone’s idea of a good time, but it certainly is a life challenge that many people dream of tackling.

So, why do it? We asked Aimee about her motivations, her challenges, and some of the lessons she learned along the way.

SV: Aimee, congratulations on your run. Why did you decide to run a marathon?

AK: I did it because I wasn’t sure if I could do it and was intimidated by the idea of it. Training was very time consuming.  I started running home from work during the week and then did the longer runs on the weekend.   The weekend runs were very long, lasting two to three hours as I got closer to the marathon.

SV: Why and how did you start out running?

AK: I found running very peaceful. Running is just a way to be alone with my thoughts. I also liked the simplicity of it. All you need is a pair of shoes. And there are so many great running spots in Vancouver.

SV: And running the marathon itself?

AK: The actual marathon was really tough. Between the 35 and 40 mark, I wanted to give up because my legs were in a lot of pain. I wanted more than anything to just stop and sit at the sidewalk.

SV: Any life lessons from this experience?

AK: What I have learned from this whole process is that we are all really capable of much more than what we think we can do. We just have to  push ourselves to get past what we think our limitations are.

SV: Do you have any tips for other people thinking about running a marathon?

AK: I’m by no means an expert – far from it and I’m a slow runner too – but there are some tips I can share.

If you want to do it, then sign up for one. Don’t make excuses. During the marathon, there were the fast runners, who of course I aspired to be, but what I found really inspirational were the people who you would look at and not think they could run the whole distance – people who were much older, people with disabilities, people with many more excuses not to be running a marathon than I had.

Once you’ve made that decision, look online to find a training schedule and stick to it. But do start out slow – runners are prone to injury – you need to build the distance slowly. Then keep your eye on the goal and think positive. If you tell yourself you can do it, it will happen.

When you live in a land of mountains and active people as we do in British Columbia, you’re going to find a lot of mountain bikers. Unfortunately, that also means there will be a few accidents and injuries along the path. Reducing injuries is what the Vancouver Coastal Health (VCH) “Shred Safe” campaign is all about.

VCH serves nearly a quarter of the BC population – from Greater Vancouver, up the Coast, and into the Sea-to-Sky territory. That’s a big chunk of land with lots of mountain bike trails. According to VCH’s Dr. John Carsley, over 100 bikers in the region needed major emergency surgery last year.

A lot of the injured bikers come from Whistler, Squamish, and North Vancouver – no real surprise since all of those areas are popular with mountain bikers. But the “Shred Safe” campaign is aimed at reducing the number of mountain bike injuries across all communities.

The campaign message focuses on how to reduce injuries:

But there are some other pieces of advice that you may not always think of when thrashing the trails. Dr. Annie Gareau works in the emergency room at the Whistler Health Care Centre. She’s a biker herself and has seen a lot of injuries resulting from the sport.

One of the biggest culprits in Dr. Gareau’s mind? Bikers push themselves too hard – riding and grinding through the trails until they are too tired. Fatigue leads to accidents. Hunger and dehydration also play significant roles in mountain biking injuries. If you haven’t properly fueled and hydrated your body, you run the risk of losing concentration.

Adults who suffer “mild” concussion injuries are three times more likely to die by taking their own lives than the rest of the population according to a recent Canadian study. Researchers suggest a better long-term follow-up for concussion patients.

The study, published in the Canadian Medical Association Journal, found

British researchers are developing a “brain breathalyzer” device used to detect concussions on the sidelines, according to the BBC.

Breathalyzers are currently used to detect blood alcohol content. But neurosurgeon Tony Belli and Dr. Michael Grey from the University of Birmingham say you can reengineer a breathalyzer to detect other things. It simply needs to be refined to detect very small amounts of certain “biochemical compounds.”

END_OF_DOCUMENT_TOKEN_TO_BE_REPLACED

The latest cover of TIME features a young football player with the words “He died playing this game. Is football worth it?”

The boy on the cover is Chad Stover; he passed away after suffering from a traumatic brain injury. He was an active sixteen year-old from Tipton, Missouri who played football for the Tipton Cardinals as a defensive back.

The Cardinals were trailing 27-18 during a game on Halloween in 2013. Chad dove to tackle with his arms outstretched when he brushed the opposing player and his helmet hit the ground.

END_OF_DOCUMENT_TOKEN_TO_BE_REPLACED

After years of denying that football players have suffered brain injury as a direct result of concussions, the NFL has admitted to a frightening statistic.

An estimated 28% of NFL players are expected to develop long-term cognitive problems from the brain trauma sustained during their careers.

According to the New York Times, a report by the NFL’s lawyers stated that three in ten players will end up with brain problems such as dementia, Parkinson’s disease or Alzheimer’s. The NFL report said the chances of players developing these problems “are materially higher than those expected in the general population” and would come at “notably younger ages.”

END_OF_DOCUMENT_TOKEN_TO_BE_REPLACED

A helmet sensor developed to alert parents and coaches to potential brain injury has hit an unexpected roadblock.

According to the Globe and Mail, Shockbox has been shunned by helmet manufacturers. Rather than supporting the concussion monitoring tool, helmet makers are warning consumers that the one ounce sensor may void the helmet’s warranty.

END_OF_DOCUMENT_TOKEN_TO_BE_REPLACED

The NFL has struck a $765 million deal with the 18,000 ex-players suing the league over concussion-related brain injuries.

With the league bringing in around $9 billion a year, Boyd has a point.

The NFL has 20 years to pay the full amount of the settlement. So by the time the settlement money has been paid in full, the league will have generated upwards of $180 billion in revenues.