Is the NFL a League of Denial? 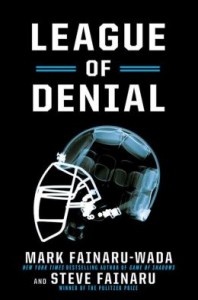 The concussion settlement between the NFL and 6000 retired players has settled. But a new book hitting shelves today is sure to reignite the controversy.

How did the NFL spend twenty years covering up and denying scientific evidence linking football to brain damage?

This is the question that League of Denial: The NFL, Concussions and the Battle for Truth is tackling head on. Some say the story could threaten the future of football.

The ESPN investigative reporters who co-authored League of Denial rely on exclusive interviews, previously undisclosed documents, and private emails to tell their story.

“There has never been anything like it in the history of modern sports: a public health crisis that emerged from the playing fields of our 21st-century pastime,” reads an excerpt from the story.

Comparisons are made between the NFL and tobacco giants of the 1950s. The book suggests that the league’s executives chose to conceal scientific evidence about brain injury just like tobacco execs covered up facts proving that cigarettes are addictive, deadly, and cancer-causing.

The NFL settled the case one week before the start of the 2013 season. They agreed to pay $765 million to players over 20 years – pocket change to a $10 billion business. The settlement means the NFL does not have to admit any wrongdoing.