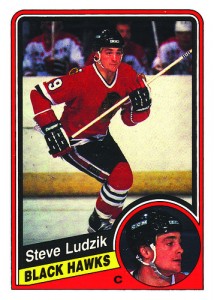 Former NHL player Steve Ludzik has been battling Parkinson’s disease for over a decade. He believes the constant pounding from playing hockey led to the disease.

Ludzik, 52, played with the Chicago Blackhawks from 1981-1990. He suffered at least six concussions in his career. But the number is likely higher because back then “you never said anything because you wanted to keep your job,” says Ludzik.

Today Ludzik is speaking up. “I know in my heart of hearts [Parkinson’s] was caused by taking shots to the head,” he says.

Parkinson’s disease is a neurological condition that causes movement disorders. Symptoms include tremors of the hands, arms, legs, and face, body stiffness and rigidity, slowness of movement, and loss of balance.

Former boxer Muhammad Ali suffers from a variant of Parkinson’s disease. His condition is said to affect 15% of professional boxers due to repetitive brain trauma suffered in boxing.

Yet researchers are still cautious about the nature of the relationship between brain injury and Parkinson’s. Ludzik’s doctors can’t confirm or deny the cause. But in his case, two red flags exist. First, there is no history of Parkinson’s disease in his family. Second, Ludzik’s symptoms began before the age of 40. The average onset of symptoms is 60.

Ludzik takes 20 pills a day to manage symptoms. He only sleeps for three or four hours a night because of the medication he takes.

He hopes that sharing his story will result in changes to the game. He believes hitting should be removed from minor hockey until players are past the peewee level (the current ruling). He also believes injured players like Sidney Crosby should consider retirement. “If you can’t live your life, what’s the sense?”

Today, Ludzik’s passion is raising money for Parkinson’s research. An event last year raised $60,000 for the Steve Ludzik Centre for Parkinson’s Rehab. He hopes to double that this year.