Ford has created a ‘Drug Driving Suit’ that simulates the effect of driving while under the influence of illegal drugs.

The ‘Drug Driving Suit’ is part of Ford’s Driving Skills for Life that focuses on youth aged 18-24. Ford says it wants to teach young people about the dangers of driving while under the influence of illegal drugs.

“It shows them that getting behind the wheel, whether you’re drunk or you’re drugged, is a terrible idea,” said Ford of Canada spokesman Matt Drennan-Scace.

Make a smart choice. Say no to illegal drugs. 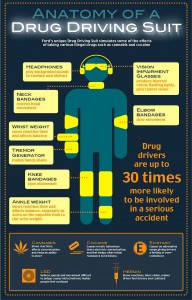