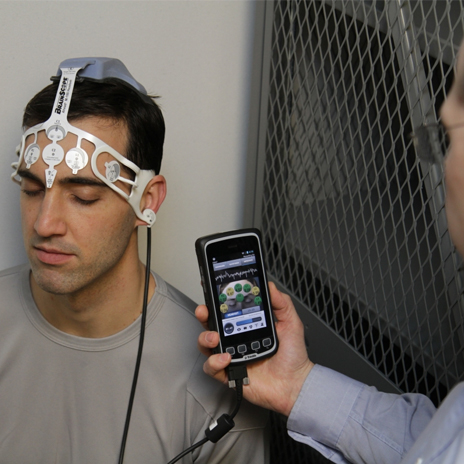 According to the USCDC, traumatic brain injuries (TBIs) occur at an annual rate of 500/100,000 individuals. Serious cases can be measured by CAT scans, but injuries such as concussions are more difficult to gauge. Untreated mild TBIs can lead to depression, dementia and other problems.

BrainScope has gained significant support and recognition for their innovative work. The US Department of Defense has invested more than $15 million in BrainScope with the expectation that their devices could be used on the battlefields.  The company was also awarded a $10 million Health Head Challenge award from the GE and NFL for “identifying breakthrough technologies and approaches that will improve the diagnosis and prognosis of mild traumatic brain injury.”

Ahead 100 is BrainScope’s first product to be cleared by the USFDA. The device makes identifying brain injuries easier. The Ahead 100 fits like a headband and uses a patient’s electroencephalograph (EEG) to identify the structural condition of the patient’s brain within 24 hours of their sustained injury. The device has been developed over six years of clinical studies and research in Emergency rooms across the US.

“A very large number of people in the US go to an emergency room after having hit their head and one of the very big questions is should this patient receive a CT scan or not,” said Michael Singer, President and CEO of BrainScope, in a Bethesda Magazine interview. ”We’re focusing on a rapid instrument to help a clinician make that decision.”